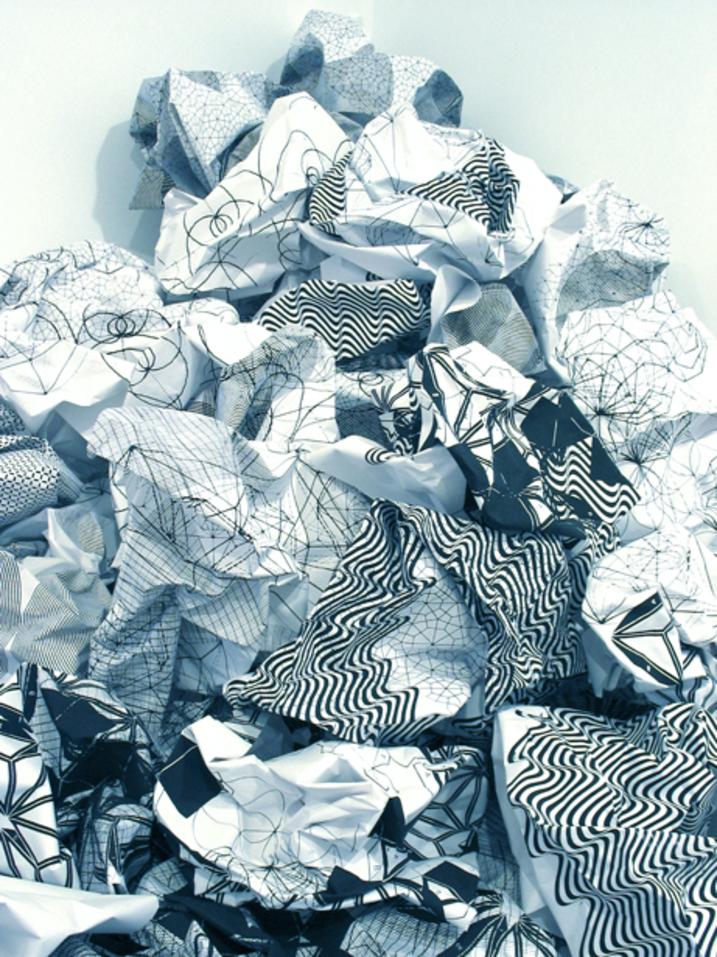 Like many artists over the years, Lewis Carroll’s Alice books have been a source of inspiration since my first experience of them as a child.

To begin with my empathy and association was with Alice. She is alone in a world where she is always being misunderstood. Then there was the irrational and obstructive behaviour of all the other creatures she comes across in this world that leave her puzzled and non-the wiser. Yet Alice, like a metaphor for the artist, attempts to make sense of things, from impossibly tiny doors to hurt feelings of mice, with a mixture of curiosity and pragmatism.

The world that Alice is thrust into is a world not subject to daily laws, physical or conventional. For Alice there are problems with time and space, speed and distance, this world is a strange construction, one that is continually shifting. This world became more significant to me when I began deforming plastic, mostly everyday objects. Creating a mirror world, an alien land, and one that lies so close to ours that they share the same surfaces and things, yet these everyday objects are transformed with energy. Kittens become chessboard queens, meanings transform and change.

When I was working on the spirograph drawings and then the scrunched, screen-printed paper piles, the concept of entropy was important to me.

Entropy is the term used when measuring a universal and inexorable drive towards a more chaotic condition. In these works a Euclidian world of familiar geometrical patterns, governed by mathematical principals, is twisted, overlaid, destroyed. By following entropic behaviour these works become admissions of the obsolescence of knowledge. This seemed to have parallels with the two paradoxical worlds of Alice. A dream world of Wonderland, a world of total freedom, where no rules seem to apply and arbitrariness seems to characterise behaviour and the world of the Looking Glass modelled on a strange game of chess, a world governed by a rigid system of rules.

Charles Ludwig Dodgson, aka Lewis Carroll, was a mathematician, he created a non-sense, partly as a critique against Victorian values, and as such he often put Alice in grotesque situations. The grotesque acts as a valid counterproposal to western classical tradition, and now equally to a modernism similarly invested in ideas of beauty, stability, clarity and rationality. Among its many attributes, the grotesque is mutable, unstable and disrespectful of boundaries. The plastic objects that I deform, their identities destabilized and their boundaries redrawn by the blowtorch, perform this critique.

It is with this in mind that I like to think metaphorically of Dodgson sending Alice on a journey across the squared and rigid landscape of the chessboard punctuated by encounters with creatures that mangle language, who are doomed in their attempts to control it and yet are continually trying to set it to work differently.

Ian Dawson is a London based artist