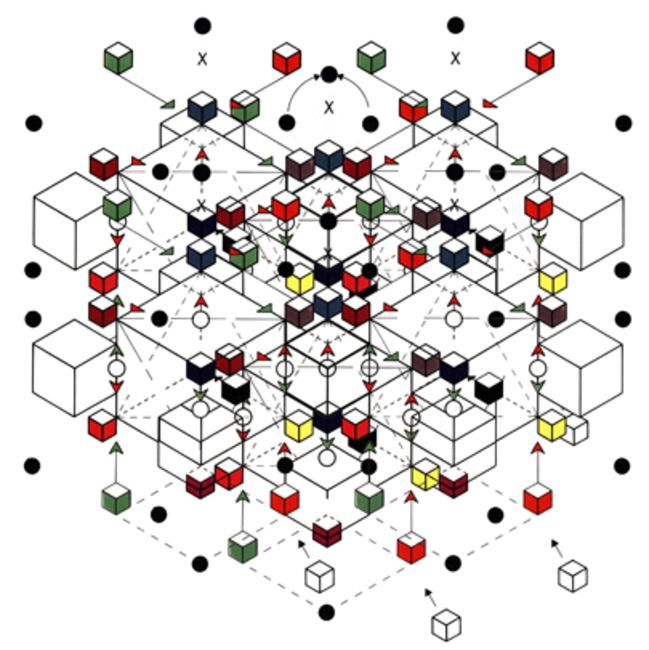 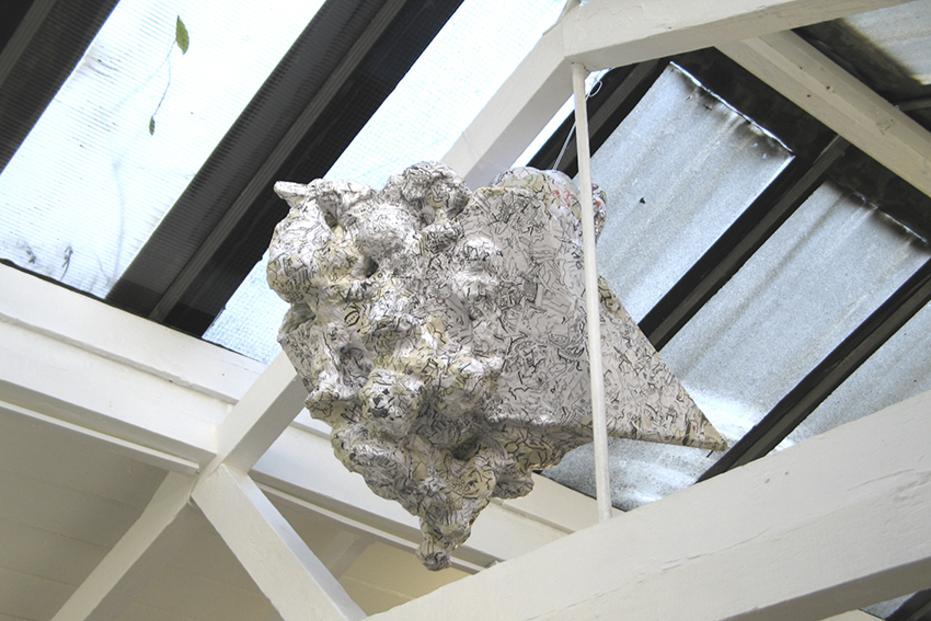 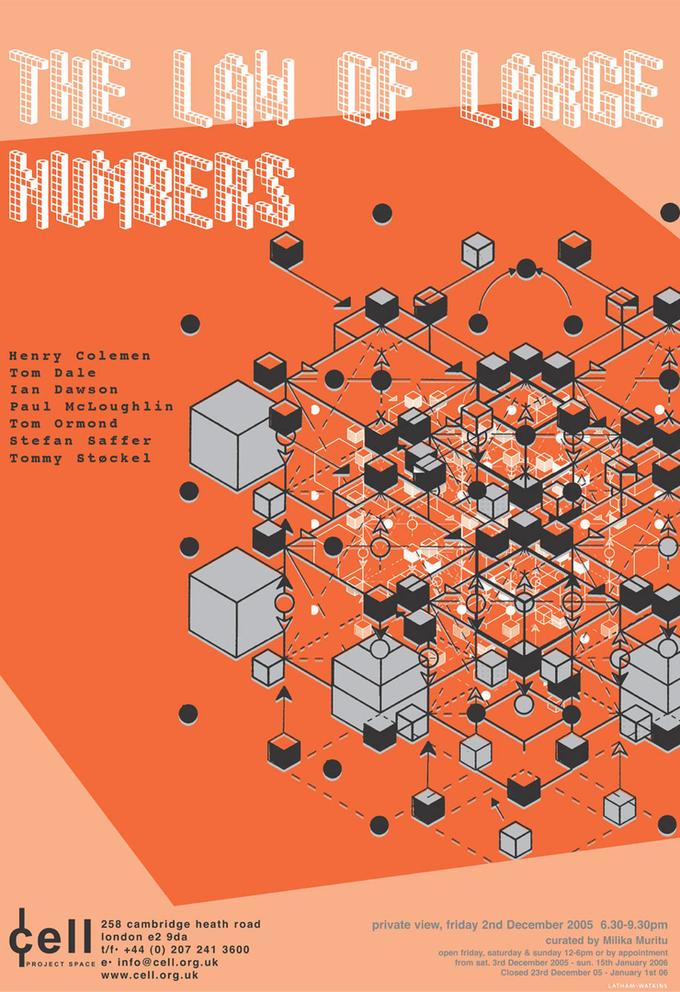 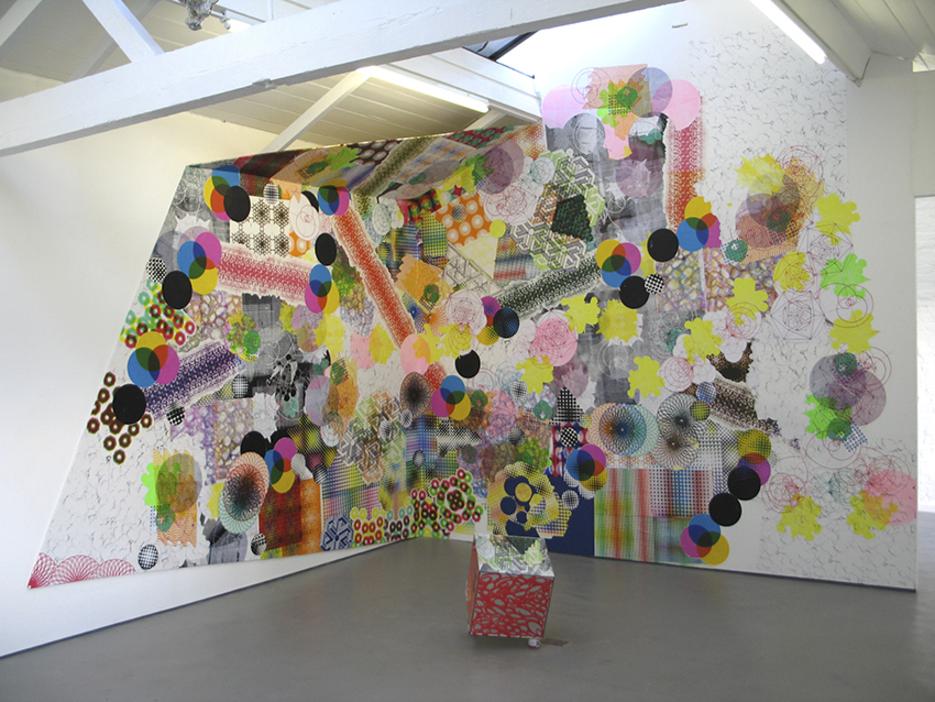 >Press Release: By operating within the constraints that science has filtered for them all 7 artists invited to exhibit at Cell, in some way, address the laws of physics with their mutation of geometry or exploding structures using mathematics, repetition or pattern to greater or lesser degree. They present a universe that is at once deterministic and obeys the fundamental laws of physics but is capable of disorder, complexity and unpredictability. The show connects our everyday experiences to the laws of nature by revealing the subtle relationships between simplicity and complexity and between orderliness and randomness. ' The Law of Large numbers' is a devise for measuring probability, where coincidence, pattern and reoccurrence create theory or fact. The fascination with matter and self-replication is centre to many of the works, resulting in optimism or a celebration of the plausible perfect form. Although many of the works clearly exhibit a sense of pathos for human civilisation, where the speeding up of evolution has created a kind of warped entropy or the decline of fabricated form.
Ian Dawson will present an installation of new works, which will first appear an amalgamation of geometric drawing and structural form. Although on closer inspection these two elements collide, replicate then satellite. Much like his earlier works where he has applied intense heat to thermoplastic objects the solids morph and dissolve into a human world as seen through the prism of twentieth century science. It delineates vast shifts in understanding since the conception of particle physics, relativity and multi-dimensional mathematics. The pixilated surfaces of his objects tessellate. Like the particles and remnants of the Big Bang they are never fixed. Just as Quarks and Gluons are hovering in Tom Dale's universe his journey into outer space is as also a journey into inner space. Contemplation transfers all too easily into anxiety. Oil traces left on the tarmac create the type of multi-coloured psychedelia not unlike the astrophysicist's findings through a telescope; reminding us of the difficulty to grasp very complex ideas about our existence.
Tommy Støckel's sculptures self replicate using crisp paper folds to divide and multiply. 'through the fold and into inner space'. They have an individuality that overcomes their generic, geometric nature. Despite their utopian, modernist clean-edged form, they seem to posses an independence that can slip into animus. Clean edge and spectrum colour are evident in the work of Paul McLoughlin and the cut -out process adopted by Stefan Saffer delineates growth or multiplication adopting the flattening effect of diagrammatical drawings.
Henry Coleman's preoccupation with the cube and its properties are evident in his treatment of its surfaces and its reoccurrence in the work. Paint, laminates, and more recently, image, temporarily, hover within its material world. He uses a palette closely associated with the Periodic Table, faded and nostalgic rendered from a world not unfamiliar with Tom Ormond's paintings, which depict the peace and tranquility of 1930s Britain. It is here, within the belly of rural Oxbridge, occurred the fantastic and awe-inspiring; from Albert Einstein's theory of relativity to Buckminster Fuller' s utopian world. Within Ormond's images the fabric of molecular science and geodesic equation artificially accelerates into the idyll of the rural landscape. Ormond's relationship with science is curiously fearful, menacing and filled with dread.