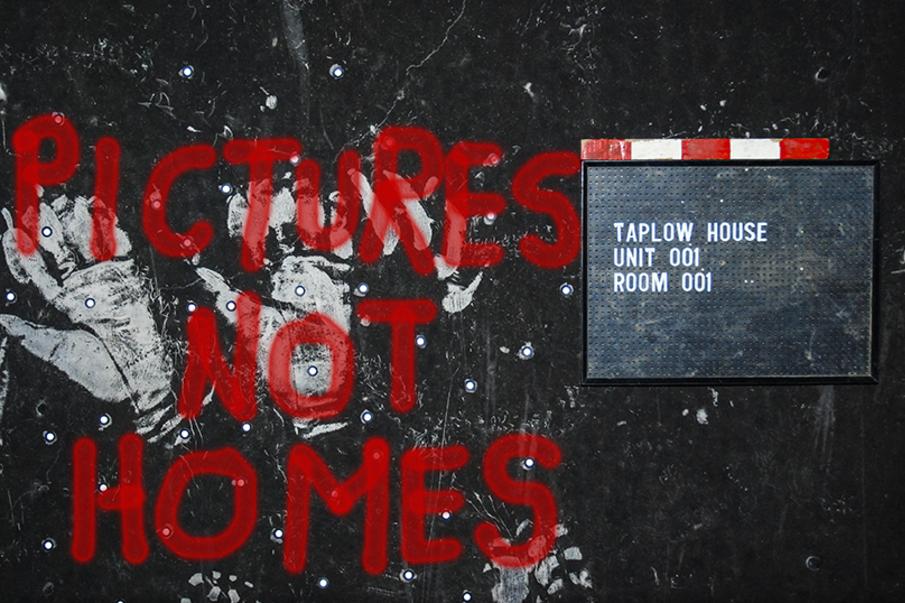 To coincide with the exhibition Pictures Not Homes, AMT research group will be hosting a symposium to explore themes inherent within the show. Against the backdrop of urban regeneration with its language of improvement the symposium will explore the multiple functions image-making technologies play in capturing and creating narratives of optimism and despair. Hosted by Prof. Jussi Parikka, guest speakers include Francis Summers, Pat Naldi, Louisa Minkin and Ian Dawson who will interweave a rich array of themes- from archaeological methods to art practice. Featuring work grounded in interdisciplinary research these themes will be pointed very much towards the future asking what role artists play in shaping the landscape that in turn is shaped by the the media that records it.

Francis Summer: A is for Front Line
This will be a discussion of some front lines, from the historical barricade to the contemporary gentrification frontier. This session will ask how art’s function might be to make life inhabitable whilst being implicated directly in the reorganisation of the urban space, intrinsic to managerial narratives of ‘bettering’, ‘upgrading’ and cultural transformation. To rehearse some questions around art and its relation to the social field I wonder what methods ‘picturing’ might take in relation to homes (as both dwelling and oikos).

Pat Naldi: Who owns the land?
My research focuses on the politics of power and its symbolic and active enactment –aesthetic, spatial, social, economic. For this presentation I will concentrate on recent works I have made on land ownership, drawing a direct link between private landed rural estates and the scarcity, and subsequent overpricing of commercial value of urban property, and designated governmental urban views which expose the socio-political and ideological construction and operation of urbanism and regeneration, and its shaping of the relationship of citizens societally and to public space.

Louisa Minkin: Freeze updates to world: pause everything
This exhibition contains digital relics from Taplow House, scheduled to be the last standing building of the Aylesbury Estate in South East London. Post-excavation digital files have been produced as scrambled material culture, scanned wallpaper hardened by resinous glue, lycra skins stretched by sand. Taplow House was named after Taeppa’s Low, a sixth centrury burial mound in the home counties, a furnished inhumation, a gathering of earth over the corpse of an ideology. An assembly point.
I will look at the application of archaeological methodology within art practice, modes of assembly and division, the hearth and the ditch, pictures and homes.

Ian Dawson: Dirty RTI
In RTI (Reflectance Transformation Imaging) a shadow thrown a multitude of times is used to generate complex narratives of sequencing and duration, tracing ghosts unseen by the human eye. The RTI image is an algorithmic synthetic construction, creating a portal to the past and in the exhibition Pictures Not Homes it is used a part of an experimental art process as spaces and surfaces within a derelict modernist tower block are recorded to discuss a politic of software and space.
'Technology is where we in the west preserve our ancestor’s’ writes Sean Cubitt, and this paper will consider earlier vision technologies - such as lenticular, integral and metric photography alongside these experimental ‘dirty’ RTI’s.

Notes on the contributers:
Dr Francis Summers is a senior lecturer in critical theory at UCA Rochester. He is interested in thinking about ways to explore photography as both a formal image-making technology and a communicative tool that cuts across a number of fields of social and aesthetic practice. Recent projects include A is for front line, Parking Lot magazine (2016) and Common Conduct, exhibitedas part of the Atomic Pictures video programme, Paris (2015).

Pat Naldi’s teaching and research methodologies are shaped and informed from an approach of interdisciplinary research that draws on contemporary arts practice, visual culture, photography, politics, geography, urban regeneration, and architecture. She has exhibited nationally and internationally including Tate Britain, ZKM Center for Art & Media, Karlsruhe, International Adelaide Festival, the International Rome Film Festival, and Kate MacGarry, London. She is a tutor in MA Photography at Central Saint Martins London.

Louisa Minkin’s research is situated at the interface of archaeology and gaming, with a particular interest on the adoption of 3D imaging into art practice. Her recent work has been included in events at Ashkal Alwan, Beirut; ICA, London; Modern Art Oxford; and CalArts, USA.  She has exhibited at the Ritsurin Gardens, Japan; The British Library, London; Foxy Production, New York. She is Course Leader for MA Fine Art at Central Saint Martins and a committee member of Five Years, a collectively organised group of artists.

Ian Dawson has exhibited extensively in New York, London, Paris and Berlin and has works in both public and private collections worldwide. He articulated the complex relationship between the artist and the creative act in his book Making Contemporary Sculpture (Crowood Press). Recent exhibitions including ‘The Wanderer’s Nightsong II’ and ‘Taplow House’ explore new 3D imaging technologies, and have been the outcome of an ongoing collaboration with members of the Archaeological Computing Research Group and The Centre for the Archaeology of Human Origins.