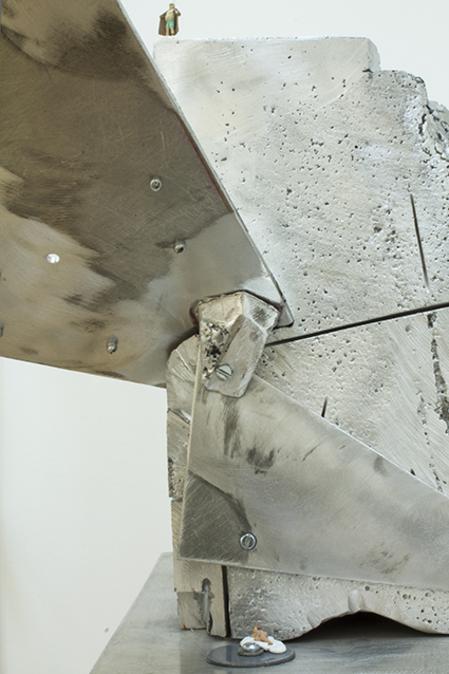 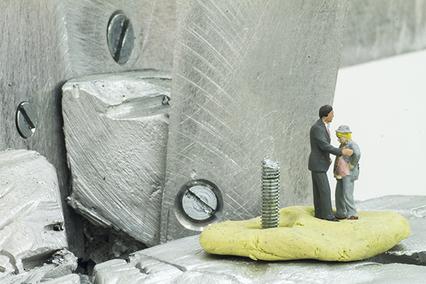 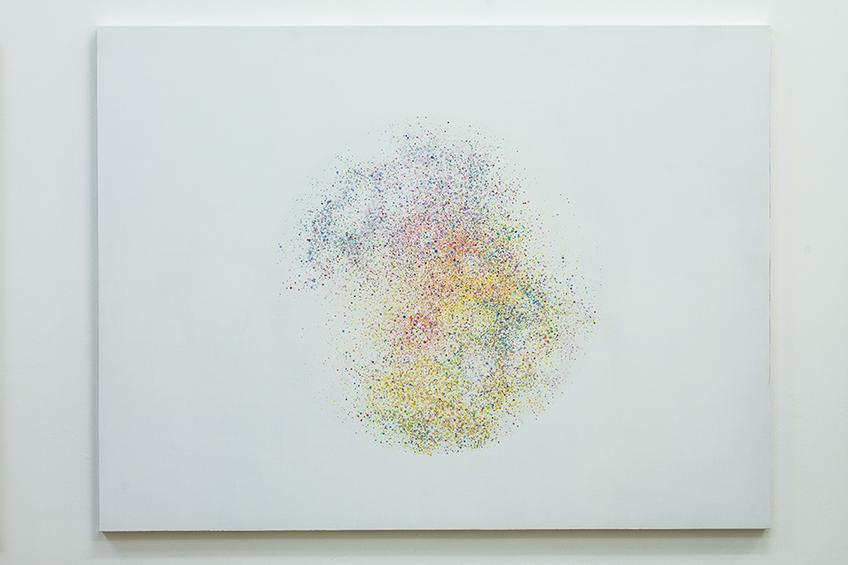 >Press Release_Miru Miru Mega Yokunaru (your eyesight gets better and better in a short rate of time) – New works by Ian Dawson
First confronted with teetering steel structures, plinths; constructions of grey painted sup- ports. These butchered remains of trolleys and frames; welded and reconfigured relics assert their presence in the space from afar, the viewers eye piecing together the utilitarian fragments, a section of ladder or a slice of girder, caricatures of their former selves.
The eye is drawn in toward a surface; which has been drilled, slashed, hacked and sawn, human hands have chopped chunks off. The cast as a replica, a copy housing the identity of the original has been further destroyed. And on closer scrutiny these surfaces are inhabited by little manufactured people going about their ascribed business, these sculptures morph into landscapes, asking to be scrutinised in ever more depth for meaning.
The pressure between abstraction and figuration is present within this cyclical drama. Abstraction an oppositional force of dreams and illusions which on the one hand offers the unadorned fact of the physicality of material and surface, yet at the same time performs that act of making ‘a space apart from life’, which in turn is re-populated by figures such as sunbather’s, perhaps passing the time unperturbed by this chain of events.
The phenomena of the eye being drawn in to both delight and question the role of detail and surface continues in Dawson’s new paintings, these have an utter simplicity to them, a dot made up from lots of other dots. These paintings appear both randomized yet sequenced, with the viewer left wondering what form of optical illusion is at work as the eye attempts to discern an image.
Titled 'Miru Miru Mega Yokunaru (your eyesight gets better and better in a short rate of time)' after the first publication of the magic eye pictures that briefly became all the rage in the 1990’s, those abstract all over patterns that would reveal a floating image (of a dinosaur or hemp plant for example) providing you had the determination to force your eyes out of focus with the pattern.
Seeing one thing and then another thing within it, termed ‘(a)spect dawning’ by Wittgenstein, raises apprehensions, of something that did not appear to be there before and it is perhaps the apprehension of this hiddenness that these works evoke. The brightly coloured dots of Dawson’s paintings coalesce sometimes clustering, forming creating a pictorial relationship to cosmological constellations, of galaxies and star formations. Searching for a pattern within these dots, the viewer is perhaps reminded of the awe inspiring moment of staring at the night sky, and perhaps what a distant memory this is. What would have carried meaning for tens of thousands of years is now a humbling yet detached experience.
By presenting both sets of works together for the first time, Dawson is posing intriguing questions, the viewers eyes are triangulated like a geographer between two different illusory bonds that of the flat terrain of the paintings and the occupied undulations of the sculptures. Miru Miru Mega Yokunaru, indeed, perhaps your eyesight will get better in a short rate of time. 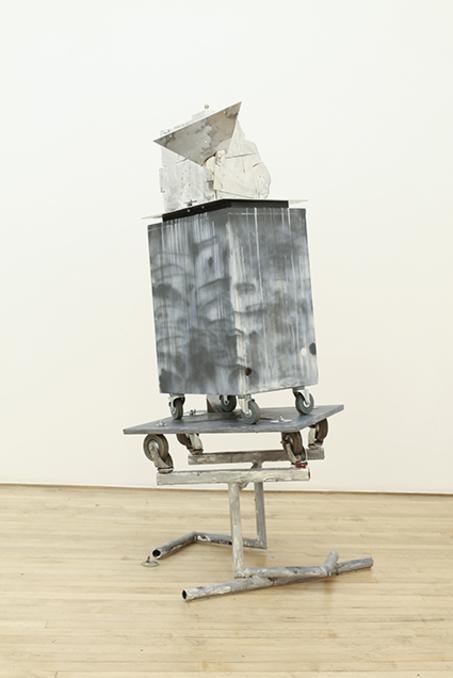 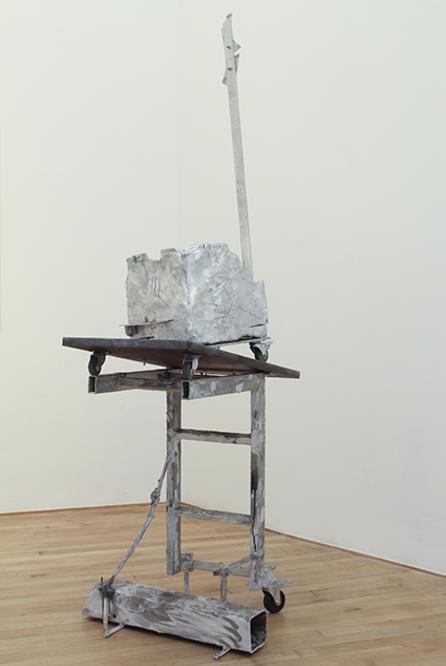 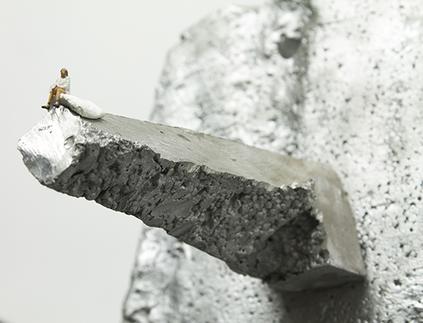 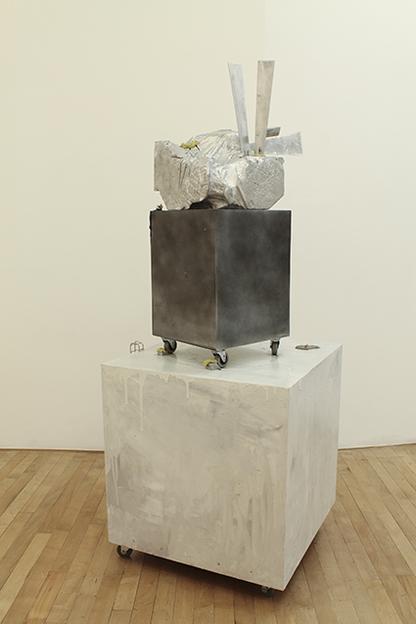 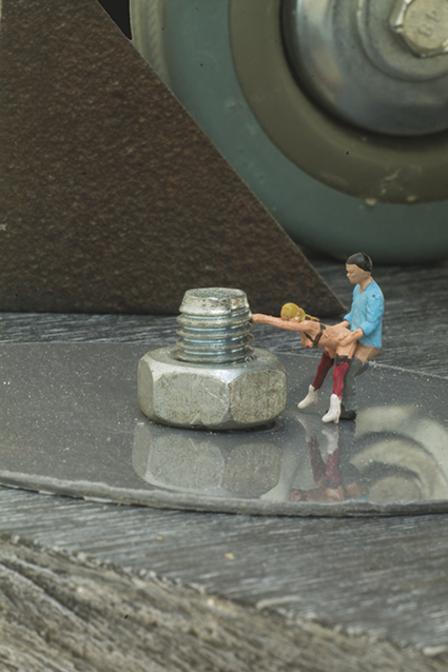 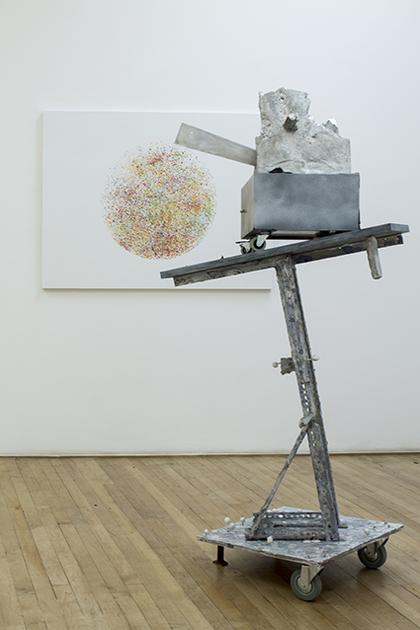 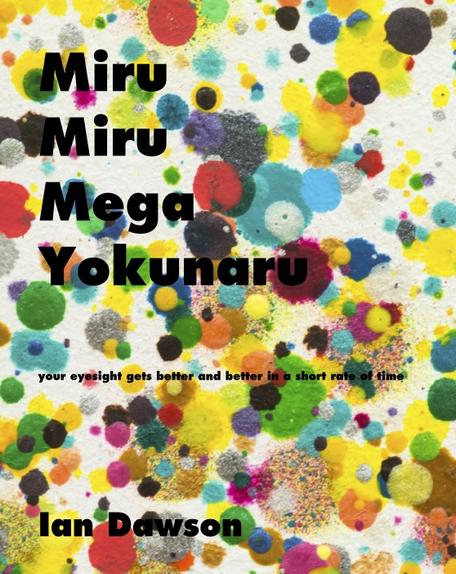 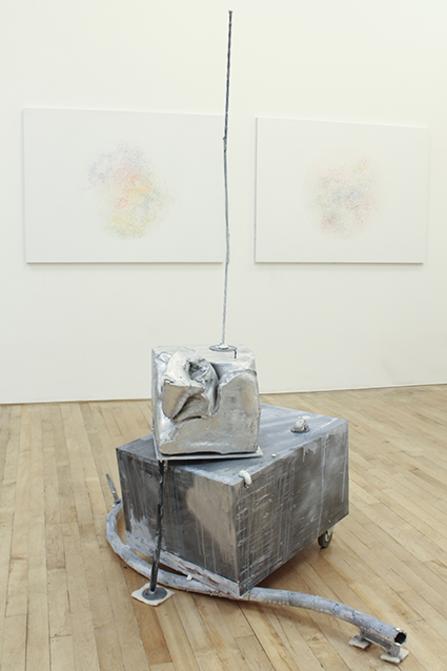