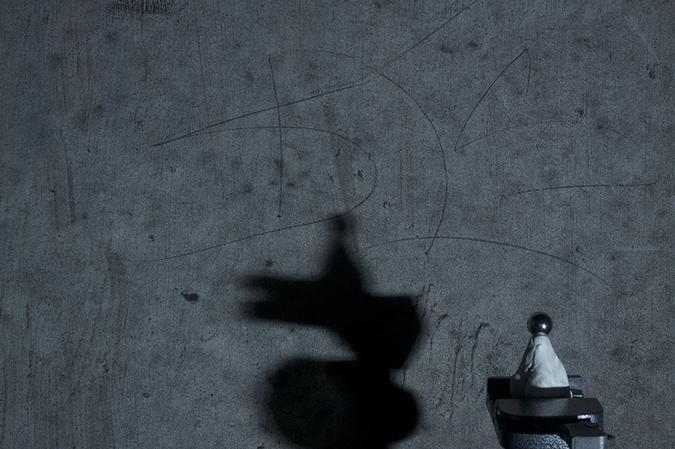 Taplow House, a housing block within the notorious Aylesbury estate, southeast London, named after Taeppa’s Low, a 7th Century Anglo-Saxon burial mound 29 miles west along the River Thames, this 1960’s housing development, famous for the Channel 4 ident, the one where the camera pans across desolate concrete walkways. The regeneration is underway, a project that will see Taplow House disappear in 2024. On the mezzanine level one faces northwards across the Old Kent Road viewing the Shard, the Bermondsey gentrification is half a mile away, it’s like standing on a boardwalk by the beach watching the tide inexorably wash in.

This raised street once featured a laundrette and shops but has been boarded off, here these spaces didn’t last long, closing only a matter of years after opening unable to compete with East Street Market. Viewing these spaces now is a powerful experience, something from our very recent past beginning to be eroded, at the outset of the archeological process, the stratigraphy full of common sights. One space, burnt out by an electrical fire, all of its electrical sockets melted and a fine even layer of soot now covering all surfaces, the room becoming a carbon pad, with traces of hand and boot prints of anyone who has broken into the space since, a Cueva de las Manos, of sorts.

But how to respond to these spaces? Louisa Minkin and I had recently joined Andrew Jones and a team of archeologists from Southampton University on a project to data scan and capture the British Museum’s Folkton Drums, neolithic carved objects. We had brought Winchester School of Art’s 3D scanner and Andrew had arrived with RTI scanning equipment.

These were different ways of engagement with the objects and throughout the day the carved white faces on the drums, were projected through LCD screens, of cameras, laptops and phones.

RTI, Reflectance Transformation Imaging, was going to be important for the Folkton Drums (discussed in this blog post), solid chalk cylinders with a linear relief of hatched lines, raised chevrons, incised triangles, circumferential lines, demarcating a surface that required scrutiny. Here the programme turns multiple images from different light sources into a single navigable frame creating a mathematically enhanced image that is able to be re-lit, a hyper-textured surface account of the object. Lights, Camera, Action, this cue might be apt for the capture stage of RTI, as the performance begins, a flash gun being recurrently repositioned around the subject, of the multiple flashes lighting the object, paparazzi style. An enduring image was of these small humble four-thousand year old faces brought into the limelight for the briefest of encounters.

To take the RTI process into Taplow House was to explore both the process and the site, pitch-black rooms were explored with the flash gun, still lives of discarded bottles revealed through a stroboscopic activity, further revealing the performance of the capture phase, and later the magic of the processing phase as the shadows traced by the flash become conjoined in the program as clouds and ripples and traces, leading us to think what is RTI really capturing? I keep returning to Manet’s A Bar at the Folie Bergere in response to this, the optical trick within the painting obscured by the myriad of refracted light from the bottles, wine glasses and mirror. The derelict cab office, is a warren of spaces, with a typical pillar box hatch separating the entrance from the offices. Here we attempted to capture the whole space with the technique and by placing the key ball upon the apex of the hatch between the different sides to the space the image becoming like a sundial, the shadows arcing out of one space into another.

The project is ongoing, its outcomes are open, thanks at this stage must go to ASC studios and Darren O’Brien for allowing access and also to Nicole Beale, Gareth Beale, Paul Reilly, Marta Diaz-Guardamino, Lena Kotoula, and Andrew Jones, we hope that this project will continue to help share practice between the two disciplines and continue this rich vein of collaboration.