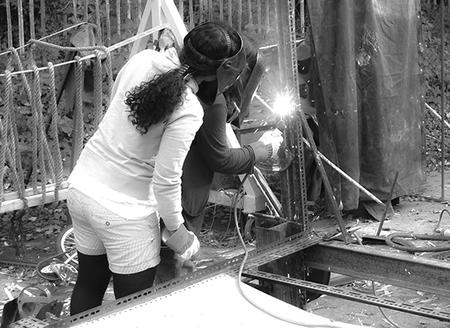 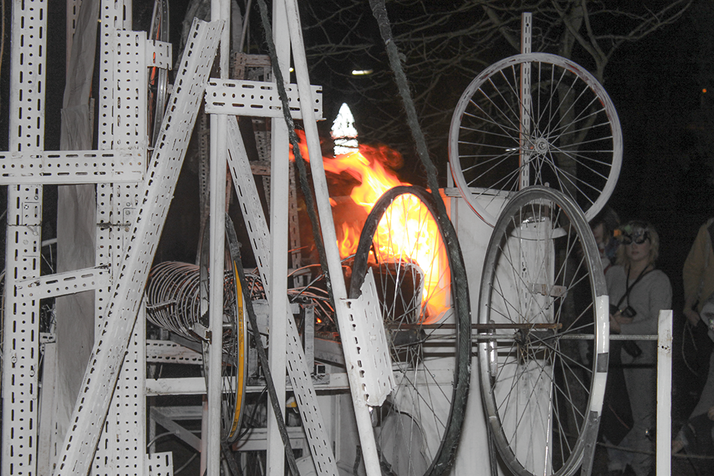 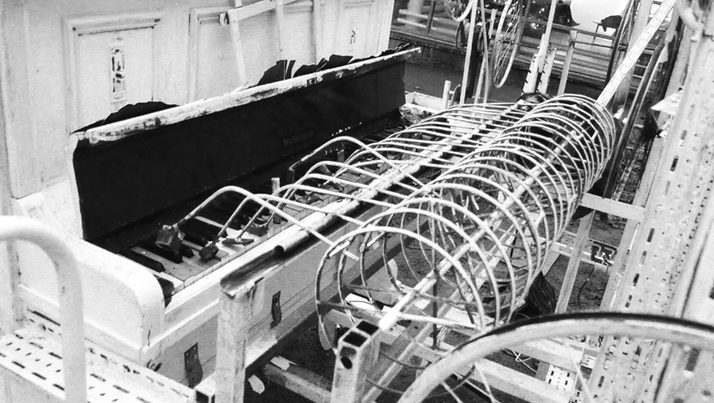 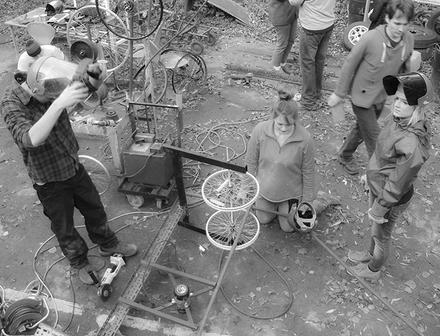 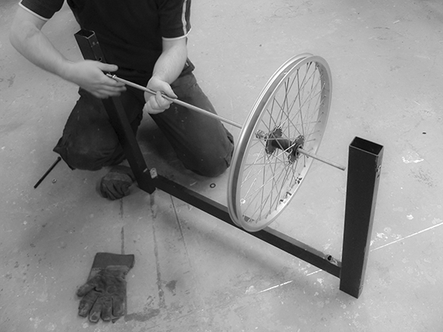 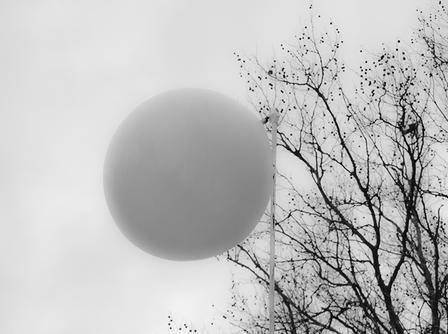 >Tinguely is considered one of the most radical and subversive Artists of the 20th Century, his work was typified by its irony, parody, humour and inventiveness.

Tinguely’s experiments with mechanization began in 1940’s when he mounted a high-speed motor on an axle from the ceiling of his Swiss apartment. From this savage device he would hang a selection of objects watching until they dematerialized, flung apart by the velocity of the contraption. These first violent experiments were to later manifest themselves fully in large destructive machines.

Using junk as his basic material, Tinguely hunted out the newly discarded, he would then employ awry engineering methods to make ill-fitting connections in order to define the entire structure quite deliberately as a system of unpredictability, the antithesis of the accepted logic of machines. Strategies such as this were central in ensuring Tinguely’s mechanical works were paradoxical. On the one hand they exist according to the terms of their reference, the strategies of the machine and modernism, on the other they simultaneously undermine them, creating a mutual relationship between the utilitarian and the functionless.

In his drawing machines Tinguely mechanised ways to produce unique art works offering a critique of artistic expression that trades on the spontaneous emergence of mark-making from a subconscious mind. Instead Tinguely was offering a machine that made perfectly acceptable drawings time after time, each one unique.

Tinguely’s machines became ever more theatrical as they began to smash beer, throw balls and shake violently, to destroy themselves. These became known as his auto-destructive works. The most spectacular and influential was Homage to New York a vast construction that came to life, and death on the evening of March 17th 1960. Homage was one of the Worlds first happenings, and was conceived as Tinguely travelled to New York for the first time from Europe by boat.

“I saw in my minds eye all those skyscrapers, those monster buildings, all that magnificent accumulation of human power and vitality, all that uneasiness, as though everyone were living on the edge of a precipice, and I thought how nice it would be to make a little machine there that would be conceived, like Chinese fireworks in total anarchy and freedom.”

The piece was constructed with the help of a small team of helpers, including Billy Kluver, and was realised in the sculpture garden at The Museum of Modern Art.

MoMA offered the relatively unknown Tinguely a Buckminster Fuller dome left over from a previous exhibition as a studio for the project. And in stark contrast to the slick futuristic aesthetic of the dome, Tinguely turned to his usual materials and spent many days plundering the junk-yards of the city.

Constructed in several sections, Homage was to perform and unravel sequentially as a play, a piece of music or a narrative, as it slowly obliterated itself in front of a live audience.

Over the next three weeks an extraordinary array of junk was accumulated and brought to the dome, for assembly, these included;

The first section to be completed was a percussive instrument, a drum that was struck by a motor from a fan and a pan, hit by a nut. Another section was made around a piano, ten armatures, assembled from various bicycle parts were attached and rigged to periodically strike its keys. A radio had been sawn in half and two scrawling text machines one vertical one horizontal were made by a MoMA intern Herbert Migdoll, that spelt out his name repeatedly before concluding with the word ‘PENIS’.

The meteorological balloon was inflated and positioned atop a pole that towered over the structure, making it over 8 metres high. (Tinguely anticipated this bursting and forlornly drooping over the structure below)

Two further elements were added at the last minute, these were to be detached from the ‘mother ship’ and take on a life of their own. One was a machine with a klaxon designed to scurry away and the other, a set of wheels with oil-can, cable drum and American flag, that was to sidle off and fall into a pond. The entire machine was then set to follow suit and steadily collapse.

There was no time or inclination on Tinguely’s behalf to test the piece.

Kluver wrote: “As the first meta-matic collapsed, it would fall backward. The piano placed on a frame two feet above the ground, would itself fall backward into the fallen meta-matic. The second meta-matic and the support for the balloon would be dragged along by the fall of the piano. Behind the piano Jean mounted a carbon dioxide fire extinguisher, concealed by wooden boards. As a lever was pulled the extinguisher would empty itself with a big swoosh. At the same time the bell on the addressograph would ring”

The evening of the performance came. MoMA sent invitations to its usual roster of public figures, The Governor of New York with Mrs Rockerfeller, Mark Rothko, Phillip Guston and Rauschenberg. The critic David Sylvester left saying “I don’t like tuxedo Dada” when the machine didn’t start on time.

The evening before the performance Tinguely had made an aesthetic decision to unify the whole piece and paint it white.

An hour later than planned Tinguely made his final adjustments and signalled the power to be connected. ‘The construction and the beginning of the destruction were indistinguishable” said Kluver as the machine juddered to life, almost straight away a fuse blew. Kluver got it going again. Although the audience knew something of the work there was anticipation that it would do something functional. Sometimes it did, but very sporadically, and in typical Tinguely fashion. After twenty minutes the structure had begun sag, it was clear that it wasn’t going to collapse entirely

By this point a fire from the piano was spreading fiercely and Tinguely was concerned that the fire extinguisher buried in the structure was going to explode. And reluctantly because of the electronic components the Fire Officers finally extinguished the piece. The crowd booed blaming the firemen. And after only 27 minutes the event was over.

Homage had failed to fail. 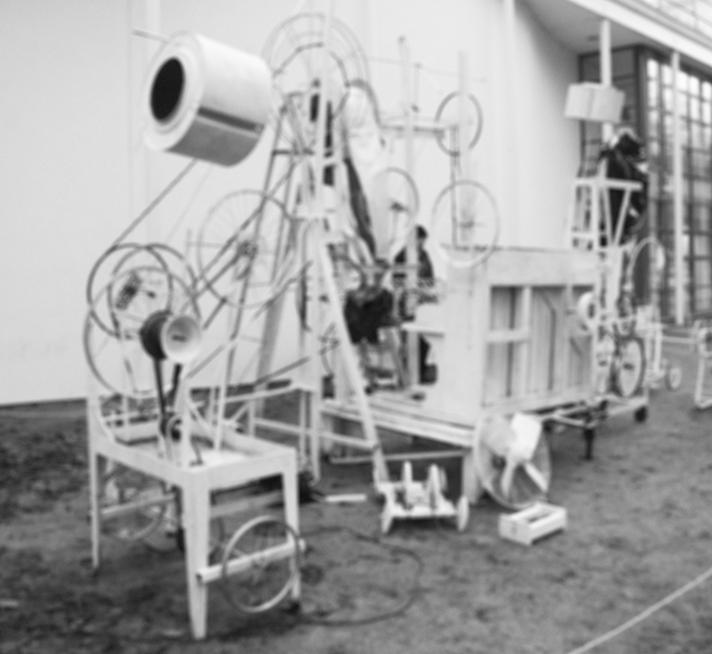 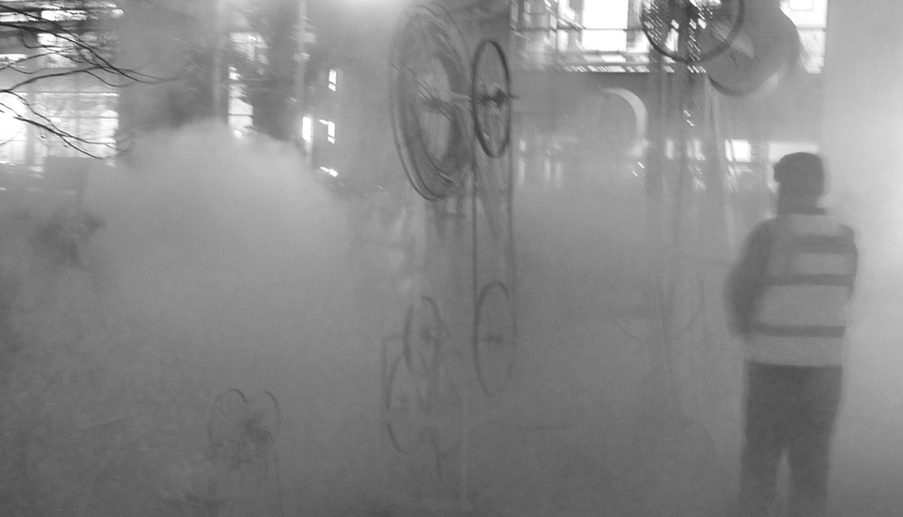 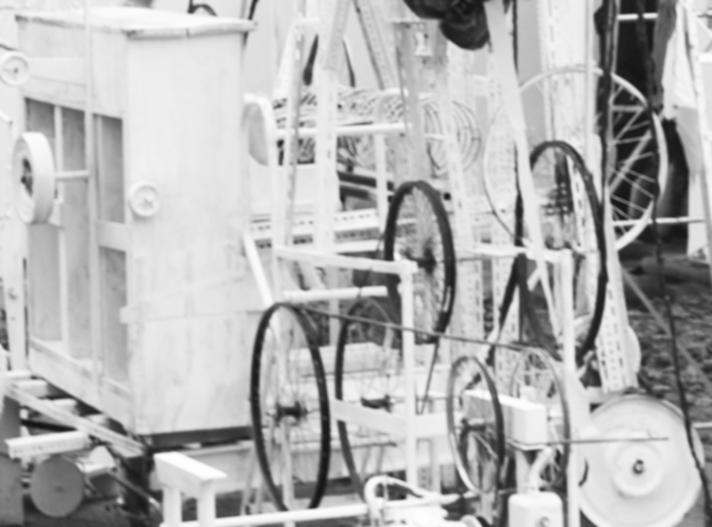 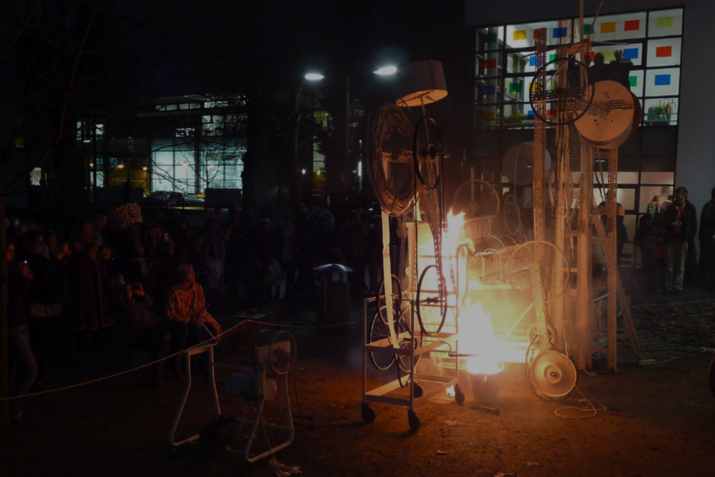 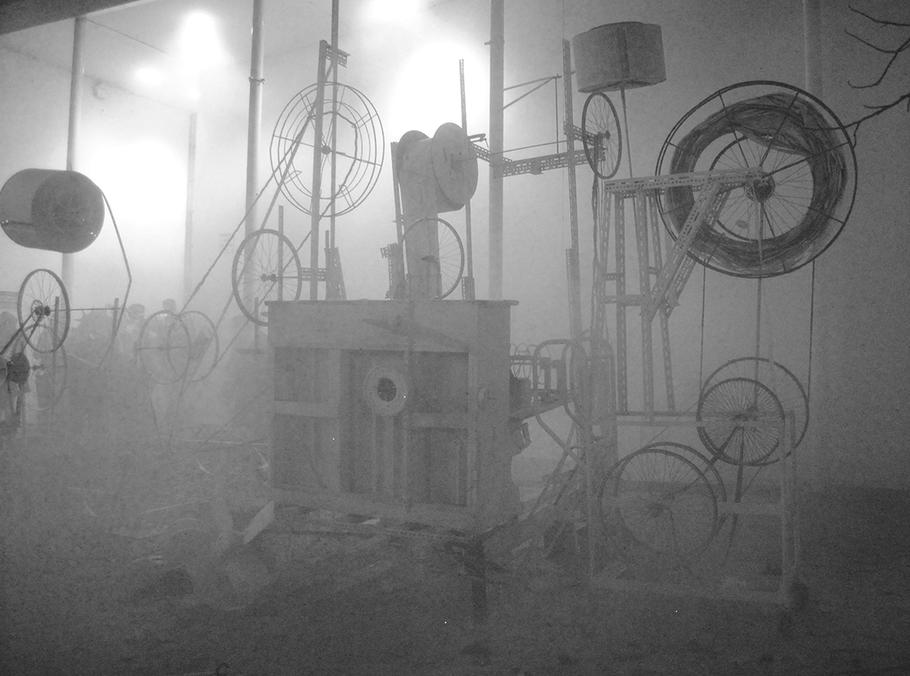 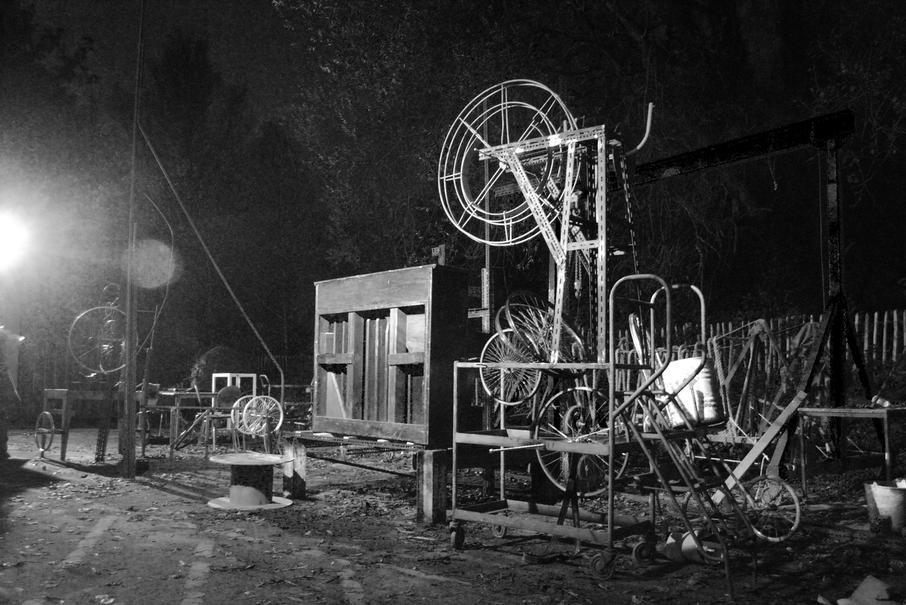 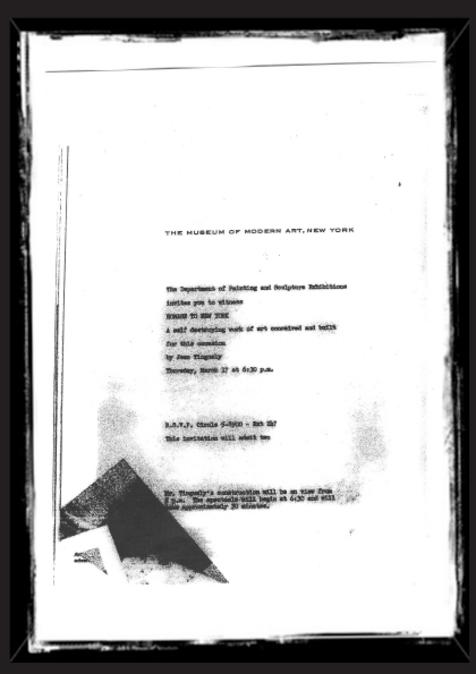 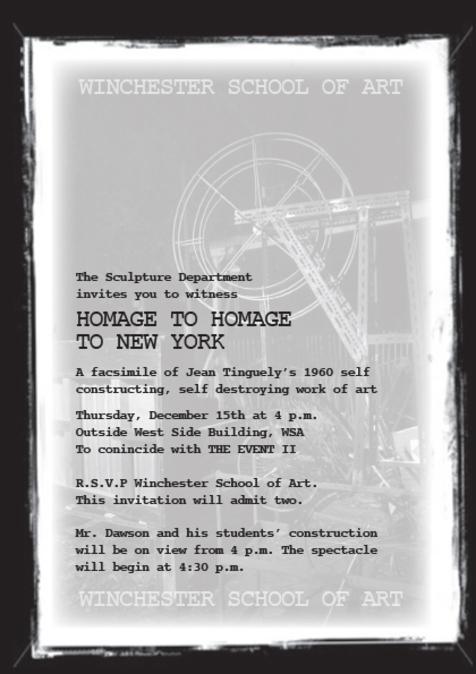