Bringing together works by fourteen international artists, Deep Highly Eccentric explores abstraction and distance in relation to outer space and the human act of gazing upwards.

Deep Highly Eccentric is the name of an elliptical and exceptionally elongated orbit used by a small number of artificial satellites, which yo-yo away from earth deep into space to probe the unknown, the unseen and the unpredictable, studying the likes of gamma-rays, heliospheres and magnetotails.

The word ‘eccentric’ refers to how strongly an orbit deviates from the circular, but it is also commonly used to describe the odd and the unconventional. This duality of meaning encompasses the precise, institutional and scientific, and everything that is idiosyncratic, irregular and quirky.

Many of the works in the exhibition share this duality, drawing from empirical sources that speak of accuracy and authority, but which are infiltrated by a form of interference, forcing gaps in information and allowing supposition to steadily blur the boundaries between fact and fiction.

A sense of distance or disjointedness is present in a number of works in Deep Highly Eccentric, particularly Sophy Rickett’s photographic series, Objects in the Field, which appropriates abandoned negatives from astrophysical research of the night sky, or Mark Aerial Waller’s film, Time Together, where each human narrative is introduced by a physicist, who analyses data from NASA’s satellite, the Solar Dynamics Observatory, to explain phenomena relating to our Sun and its electromagnetic radiation. Sculptural works by Systems House adopt the modernist aesthetic of technological structures such as pylons and communication devices; yet also undermine it by mutating into something less severe and more flirtatious.

Nahoko Kudo’s site-specific installation, Parabola, draws upon Galileo Galilei’s experiments with falling bodies, and Tim O’Riley’s film, Mental Exercise, gently communicates a sense of human scale in relation to vast and inconceivable distances; both works poetically revealing the parameters of our world with a nod to scientific exactitude.

Other works address themes of distance with the human figure as the focus. Louisa Minkin and Michael Curran’s video, The Sun and The Moon, features a humanoid sun and moon as they bob in and out of centre stage, whilst Orbit, a video by Alex Schady, presents a lone human figure singing words of love whilst gazing up at our heavenly lunar body. In Nick Stewart’s video, Face Up, faces gaze upwards, the object of their gaze unclear; all we witness are emotions of shock, wonder and awe, as they flash across the subjects’ faces. Ground Truthers, a sculptural work by Ian Dawson, suggests a dystopic haven upon which miniature figures sunbathe and pursue activities such as photographing what lies beyond their own little world.

The Boyle Family projection, Earth, Air, Fire and Water, has its origins in earthly matter but becomes a psychedelic and otherworldly light show teetering on the edge of oblivion.

Ellipses, circles and spheres are common throughout the show, in the form of planetary associations, looping narratives and geometric abstraction, as with Mia Taylor’s watercolour studies of invisible forces and Kjetil Berge’s concrete wall-based sculpture that harks back to Cold War spy-bunkers and surveillance by the all-seeing glassy eye.

Finally, Mikala Dwyer’s video, Goldene Bend’er features a group of shimmering masked characters as they ritualistically perform the act of going to the toilet, reminding us that whilst we dream of far-off galaxies, the most unexamined eccentricity is often right here at home. 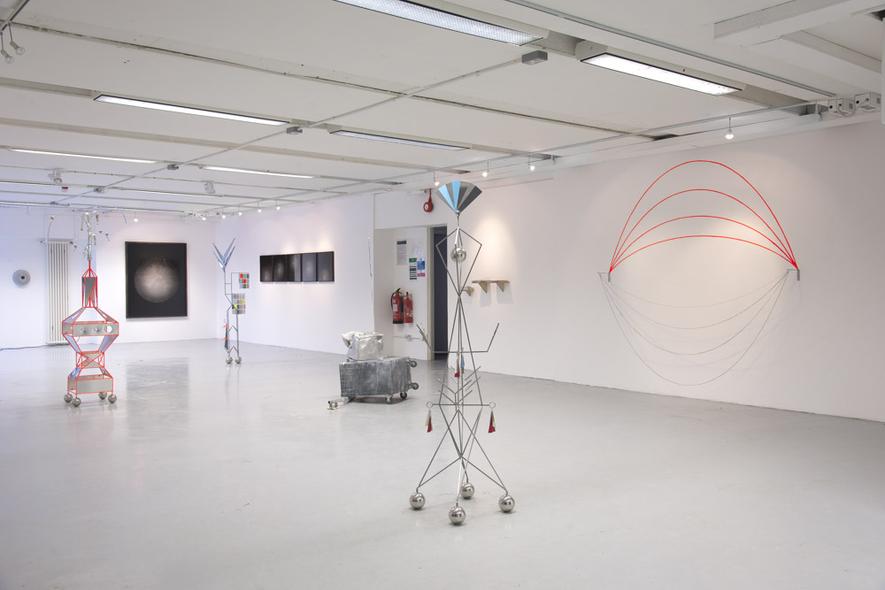 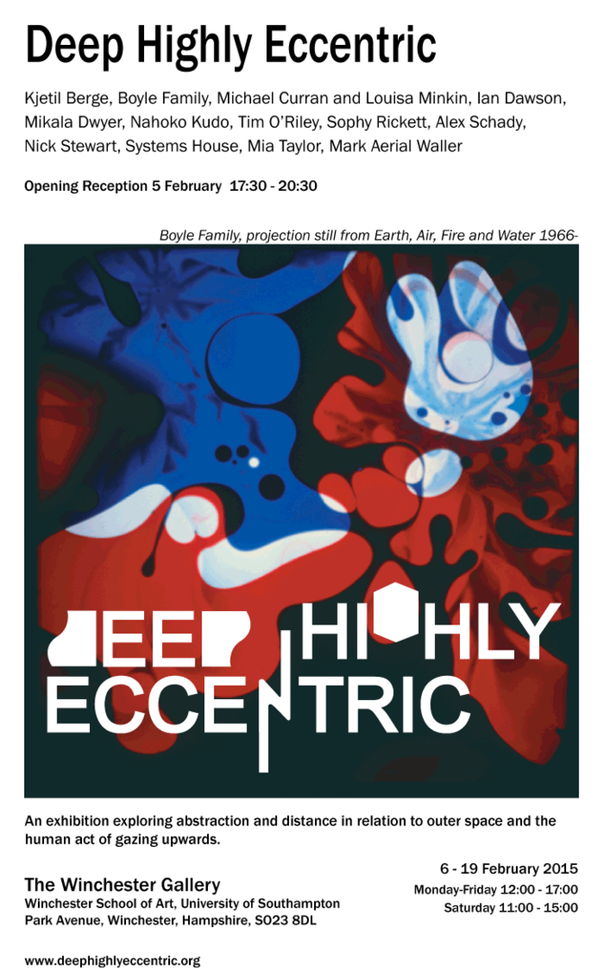 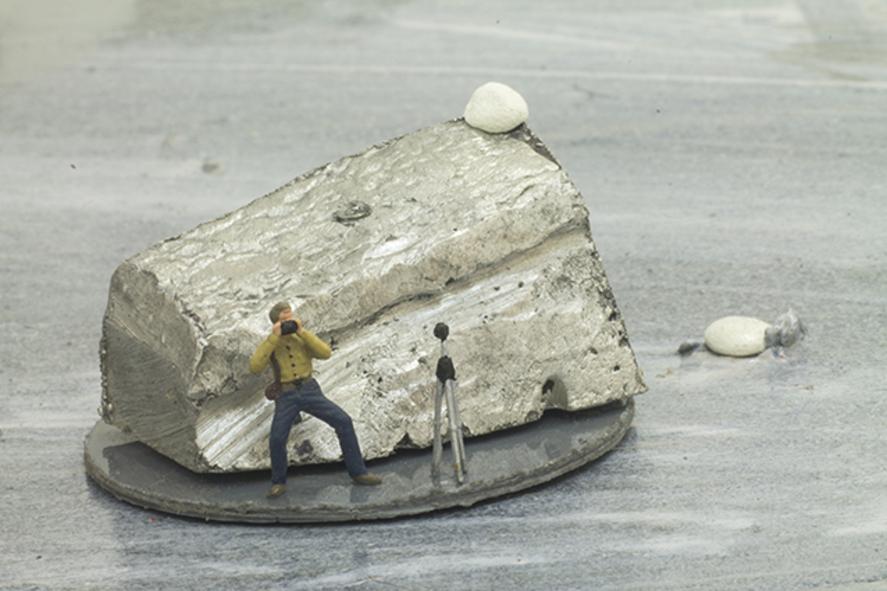 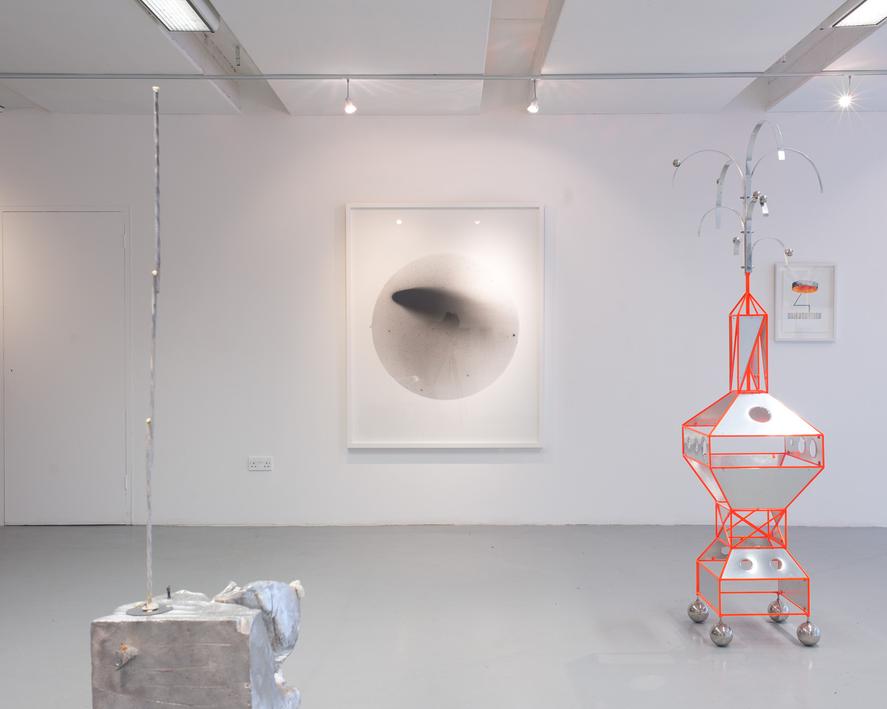