>Tilt Trucks and Free Fliers
Things hold together for a certain amount of time and eventually fall apart. Sometimes order is disrupted abruptly. Criticality, in the language of complexity theory, is the point at which a system's equilibrium is lost, whether it's the moment before an earthquake, a volcano, a market crash or a sneeze. As a teenager I once returned home to find my best friend's house across the street burnt down. It was upsetting to see those familiar rooms, now open to the sky, snow piled on a chaos of charred furniture and household stuff. I was stunned by the TV, which had become a horrifying cartoon of its once cozy banality, its warm flicker torched into a snow-capped drool. Ian Dawson makes artworks that could have been pulled from such a conflagration. He applies intense heat to mass-produced plastic objects to induce many moments of criticality, including cognitive ones. Dawson avoids the sentimental or tragic overtones of a staged trauma aftermath with festively baroque compositions and buoyant off-the-shelf color. His sculptures are evidence of collisions between objects and forces, between stories told at different speeds. The design and original purpose of store-bought manufactured objects is made to intersect with the force of Dawson's florid aspirations.

The encyclopedia describes thermoplastic as a polymer in which molecules are held together by 'weak secondary bonding forces' that soften when exposed to heat and return to a solid condition when cooled. This is what gives plastic its plasticity, its capacity to be molded into any shape. Dawson uses a blowtorch to melt and bond plastic bowls, chairs, wastebaskets, hangers and milk cartons. The objects slur together to make artworks alive with arrested movement. The blowtorch is a surrogate for the artist's hand; its scorching touch reshapes material according to the artist's spontaneous and chance-embracing intentions.

Dawson's creative destructions subtly elaborate the various industrial and geological back-stories of plastic. In the beginning dead plants and animals became crude oil under profound terrestrial pressure and geothermal heat. Later, companies made toys and plastic hangers from the processed remains of those organisms so that the artist could restore some nature to them in the form of accelerated entropy. Dawson efficiently converts his new plastic goods into scrap in an extravagant production of waste. He adds, however, a rich genealogy and wealth of offbeat references to artists like John Chamberlain, Robert Smithson, Yves Klein and Salvador Dali. Refined materials become raw material for elaborated refinements. Safety orange, industrial blue, and tutti-frutti rainbows of cheap color, selected by the manufacturers to signal fanciness or functionality, are re-used by Dawson for painterly effect and compositional brio.

Dawson will also make for Grand Arts a sculpture made of crumpled paper. This work, like the melted sculptures, is constructed from destroyed machine-made products. The papers begin with various geometric patterns and diagrams printed on them, which are then crumpled into balls and assembled into piles. The works make a reference to topology by enacting processes best described by that science. What are the rules governing the crumpling of paper? How can the various break points and angled edges of a crumpled sheet be predicted or described? Topology is interested in the relation of math to objects. Dawson's paper sculptures solicit those considerations by making volumes constructed from a single plane. He converts an image into a thing by crunching its two dimensions into three. It would require a brain-stretching act of imagination to picture the original pattern from our always partial view of each crumpled sheet. The regular pattern printed on the paper both highlights and camouflages the chaotic geometry of the crumple as it rises into a pile. Action is layered upon abstraction layered onto actual things; behavior collides with thought and organized matter. If Dawson's plastic pieces gesture toward the floor his paper sculptures seem to rise toward the ceiling. Together they fill the gallery's architecture with highly artificial stalactites and stalagmites.

So much depends on the laws of physics. Dawson is a process artist in the way he applies initial operations to the materials and then lets nature do the rest; he rolls the dice. In a set of drawings using conventional marbleizing techniques the vagaries of chemical circumstance become a snapshot of fluid dynamics; chemistry generates the image. Dawson's magic is familiar but can still astonish with lurid and nuanced effects. The images look like celestial or microbiological objects seen under enhanced magnification. The surface plane of the paper intersects with the irregularity of the marbleizing brew to make plasmic images ready for publication in a science publication.

Dawson's sculptures encourage analogies; they can be seen as tiny islands or giant blossoms. They are like Chinese scholar rocks, gongshis, in the way they evoke a sense of landscape in microcosm. The clefts, precipices, holes and hollows of Dawson's sculptures resemble science-fiction geological formations and can be considered according to the elaborate gongshi taxonomy of sources and attributes. His objects are suggestive the way a mottled and stained wall was for Leonardo: a chaotically dispersed perceptual field that one can project into or imaginatively enter. The allover field solicits our brain's habit of projecting coherence. The unintegrated becomes integrated according to cognitive-perceptual habits, like when we recognize figures in the clouds. Dawson's willed incoherence performs what Robert Smithson would call in a different context "entropy bootlegging". Both artists repackage the effects of dissolution for our delectation and their own emphatic assertions.

7 Chairs, 2000, was a brightly colored stack of inexpensive children's chairs before it got the Dawson heat treatment: three shades of blue, smiley-face yellow, and a fluorescent orange. Seven becomes one as Dawson's new math reduces the chairs to a single congested mass. The colors reveal and conceal each other with all the dynamic sluicing and improvisational panache of an action painting. Industrial standards of repetition are burlesqued by Dawson's non-reversible operations. Molecules are unfastened and sensitized to pokes, prods and the pull of gravity. The softened plastic obtains a beautiful fluency of surface with subtle modulations and the elimination of detail. It obtains what Medardo Rosso wanted from his wax sculptures an "explosive release of latent energy".

Ian Dawson's works are an efflorescence of catastrophe. His melted sculptures are gooey graveyards of heat violence. They are terminaly relaxed, halted on their way to total dissolution. It is as though the energy required to sustain upright solidity has succumbed to a potent lethargy. If the heat were to continue these pieces would eventually become puddles. Like water, the sculptures display what Francis Ponge called "an hysterical urge to submit to gravity". The objects are having a nervous breakdown.

For Grand Arts Ian Dawson will work with plastic tilt-trucks and multi-colored free flier dispensers. Both objects are designed to transport goods from one place to another but Dawson will interrupt their missions to purvey his own more ephemeral cargo. MOD, the company that manufactures the tilt trucks, promises in its literature to "shape your ideas in plastic". Their trucks are "ruggedly built, for moving any kind of bulk material and long service under the toughest kind of punishment". MOD wasn't anticipating Ian Dawson, who will press these humble instruments into service both catastrophically grand and not considered by their expert designers.

Dawson purchases his material new. Paper and plastic are taken out of circulation to be recycled into altered art-states. The energy that held the plastic in the form of a wastebasket or the paper in the form of a flat sheet is undone for a moment to suspend the objects between two states. The originals are sometimes transformed beyond recognition, their identities unfastened along with their molecular structure. Dawson lays speedbumps in the way of recognition. He queries the stability of things the way a Dutch master might use the image of a snuffed candle or overturned goblet in a still-life painting.

Objects become more conspicuous when they cease to function. Broken things flare into consciousness to interrupt the smooth flow of our routine. Dysfunctional objects lose the happy invisibility they had when they worked properly. Artworks, likewise, help us to trip on overlooked objects. But art also encourages us to see through things, to their history, cultural context, or to the artist. We are led, hopefully, to re-look at the objects around us with skewed vision. Those things, as a consequence, might be felt to look back at us.

"I want to say just one word to you, just one word. Are you listening?… Plastics." This is the secret to a brilliantly successful future emphatically given to Ben, Dustin Hoffman's disoriented character in The Graduate by a well-meaning friend of his parents. Ben wants no part of that future but his incipient counter-cultural values have, in the years since the movie, come, gone, and returned to a world more dramatically polymerized than anything those characters in1967 ever imagined. Ian Dawson, though, takes the older man's advice seriously in a deviant way. He transforms a post-war consumer utopianism into a high-art anarchism. Dawson's work both protests and celebrates the state of things. He produces metaphors that help us to imagine a world more extravagantly mutable than we thought. 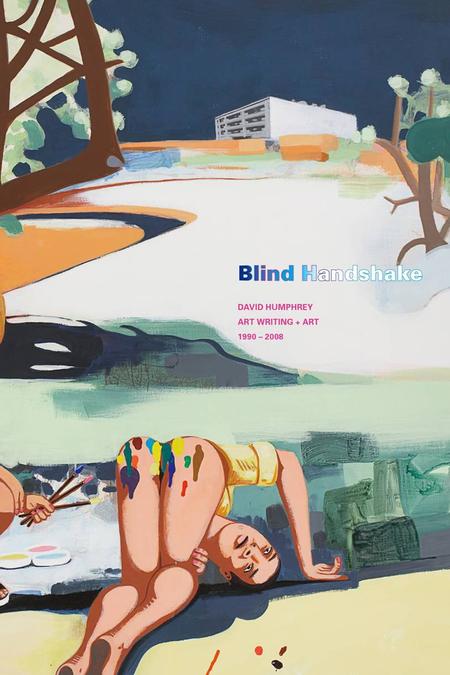 A work of collaboration between the artist and critic David Humphrey and the graphic designer Geoff Kaplan. As important for current discussions of art and design as it is for discussion of contemporary art. Artists drawn into the action include Richard Prince, Ian Dawson, Chris Ofili, Lucien Freud, John Currin, and Mary Heilmann.